Many of you will know that I have been blogging on the main economic drivers of Scotland Vs England and this blog post is the culmination of them all.

This blog post and the charts below should highlight to you all that Scotland, even though it hasn’t actually legally borrowed any of the billions of pounds listed below, it has consistently outperformed the rUK in terms of GDP to debt as a population share post and pre devolution.

The UK is still here after 300 years, the UK is striving for independence out of the EU, yet Scotland is denied it even though it has over the last 115 years created a more robust economy and its economic drivers far exceed those south of the border.

The first table below shows how (even today) Scotland’s “illegal” debt share is distributed on a percentage share of UK population for Scotland.  With that method of assigning debt it’s fairly easy to use that basis to go back to 1901 and see how Scotland faired against the rUK.  Between 1901 and 1931 (using decades as points otherwise the table becomes huge) the rUK’s economy appears to have fared better, not hugely better, but better none-the-less.  I should mention at this point that the GDP of Scotland between 1901 and 1971 is based on the average population share Scotland had in the UK as a % of entire UK GDP as Scottish figures just aren’t available.

Between 1941 and Devolution (for arguments sake we will use 2001, rather than 1999 as i used decades ending in 1 to start at 1901) Scotland’s economy in terms of GDP to debt has outperformed the rUK with Scotland having 4 decades of a lower debt to GDP ratio compared to the rUK, which only performed better than Scotland in 2 decades (1951 and 1991).

Since devolution, Scotland has outperformed the rUK in 2 out of the 3 marker decades and more tellingly, since 2010, the Scottish economy, on average had a debt ratio of 66.75% compared to the rUKs ratio of 75.05%.  To compare this further, let’s look at the numbers for 2017.

In 2017, Scotland had an 8.2% population share of the UK, so it takes an 8.2% share of UK debt.  Scotland has its own measurable GDP which we deduct from the entire UK GDP.  This leave us with numbers for Scotland’s “debt” and its GDP and the rUKs debt and it’s GDP.  Scotland had a debt to GDP ratio of 78.4%.  The rUK had a debt to GDP ratio of 85%.  In international terms, Scotland has a better debt to GDP ratio than the EU (collectively), USA, Spain, Japan, Canada, Belgium, Singapore, Italy, Portugal, and France.  (This list is not exhaustive, there are a lot more it outperforms).  In number terms, Scotland performs better than 47 global countries, the rUK performs better than only 31.

The below graph is a representation of Scotland’s GDP to debt ratio plotted alongside the rUKs since 1901.  As you will see, they have followed a similar path but for large parts of it, Scotland (Blue Line) has outperformed the rUK (Orange Line) and continues to do so, even with 75% of fiscal control being retained by Westminster.

The next three images are all related to previous blog posts I have written on the main economic drivers of the English and Scottish economies.

The first image in the sequence was created after analysing 11 areas on a Scotland compared to England basis.  In all 11 areas, Scotland outperforms England. 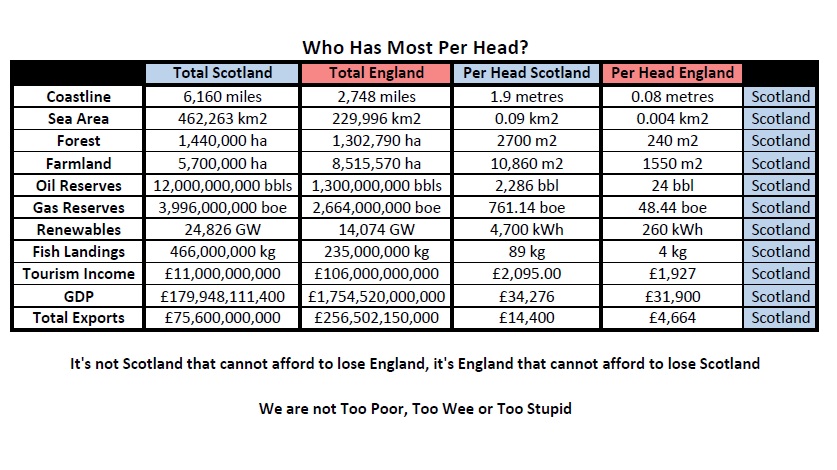 Irrefutable Evidence – It’s not Scotland that’s too poor to be independent, it’s England!

The second image in the sequence was created after analysing 8 further areas on a Scotland compared to England basis.  In all 8 areas, Scotland outperforms England.

*Part 2 – Irrefutable Proof that it’s not Scotland that’s too poor to be independent, it’s England!

The third image in the sequence was created after analysing the 19 previous areas on a Scotland compared to England basis.  I created this third chart, not as a method of looking at what we have as a nation but what we spend.

Now for all the charts and data above, which are all sourced either here or on the other blog posts linked above, I haven’t even touched on what Scotland stands to gain from independence.

Scotland, being a founding member of the Union would be entitled to a population share of all UK Government owned assets, including Commonwealth assets.  Currently Scotland has 8.2% of the population, so in effect, it would be able to either:

Whatever happens, Scotland is well equipped, and in most cases better equipped to become independent on its own than the rUK is without Scotland, and in terms of negotiating with the rUK Government, it stands to gain either no debt at all, or its share of debt or both which is per ratio better than the rUK and 8.2% of all UK and Commonwealth assets, which it could either sell off to clear its debt, or keep to provide it with a fairly instant global presence as the newest independent nation on earth.

The more I have dug around garnishing all this data and presenting it to you all, one thing has become abundantly clear.  GERS is a fantastic way of hiding Scotland’s true wealth and preventing the UK Government for showing England’s lack of wealth.  GERS is an abomination to the Scottish people, it serves one purpose only and that purpose is to keep control of Scotland and her finances and keep reality out of the picture!

The UK Government will not let go of Scotland.  This is why they lied to the population via BetterTogether and why they lied to our elderly and vulnerable about losing their money and businesses moving.

They cannot allow Scotland to thrive when they are struggling because the world over, you will see that the best performing economies and the happiest places to live are all small independent nations!

We have absolutely NOTHING to lose by becoming independent and EVERYTHING to gain!

Now is the time!

Sources for Table 1 above