There has been a significant amount of chatter in the mainstream media and unionist journalists about the recent 2018 PISA scores, which of course, are used to bash the SNP.

There are two elements of society that I cannot stand are used as political point scoring.

With the ever growing political toxic environment and the huge reduction in any form of investigative journalism, I decided to look at the figures.  The sources for all are listed below.

Firstly, we need context on why comparing Scotland to England, Wales and Northern Ireland is flawed.  The PISA report tells us:

In other words, the results measured in Scotland are quality assured, the results from England, Wales and Northern Ireland are NOT.  Furthermore, Scotland’s figure is included in the UK OECD figure.

Below I have created three tables, all of these tables use the final results which have gone through the PISA formulas and measurements and I have not altered any of it. 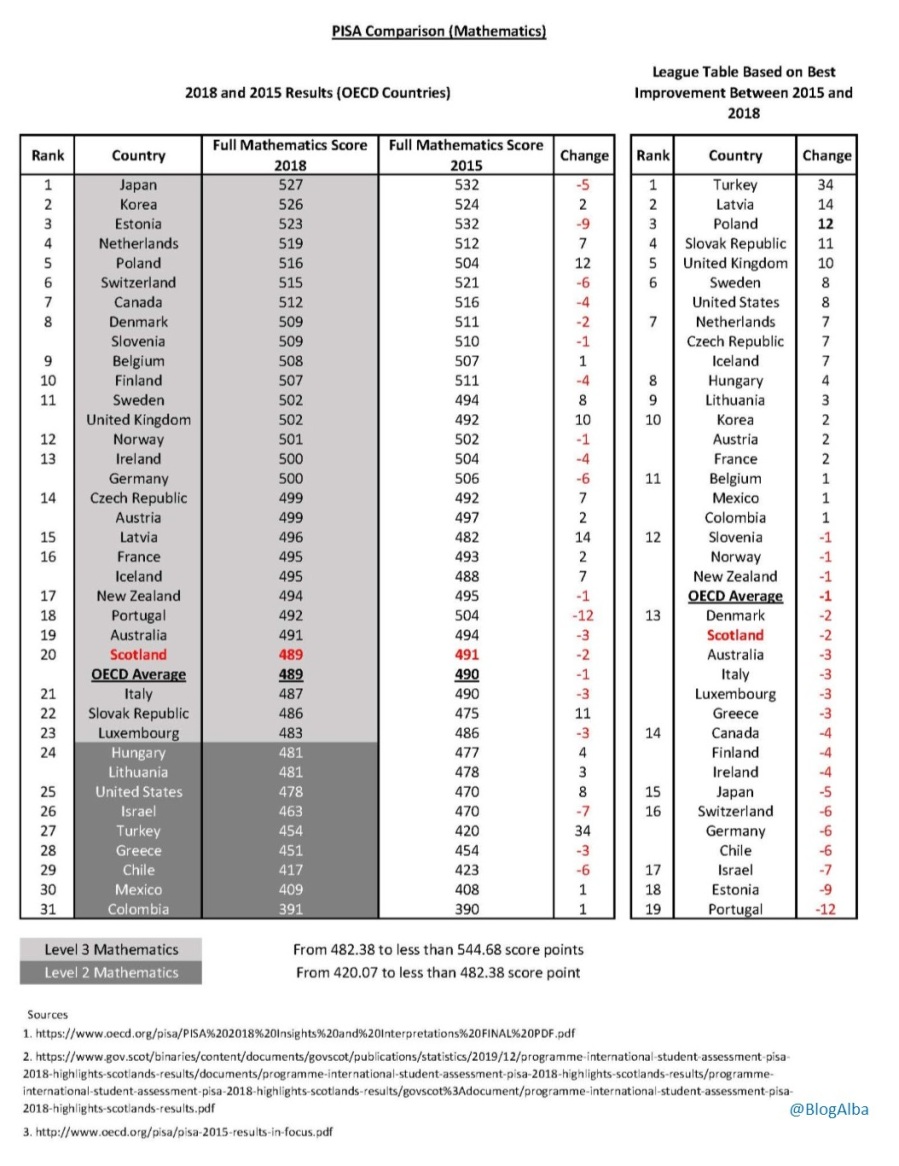 As you will see from the above, Scotland, based on its 2018 ranking within the OECD sits at 20.  This is above Italy, Luxembourg, the United States and the OECD average.  Overall, between 2015 and 2018, its score dropped from 491 to 489 (-2).  This means, overall, between all OECD countries, Scotland’s change in scoring left her sitting joint 13th in terms of overall change for Mathematics. 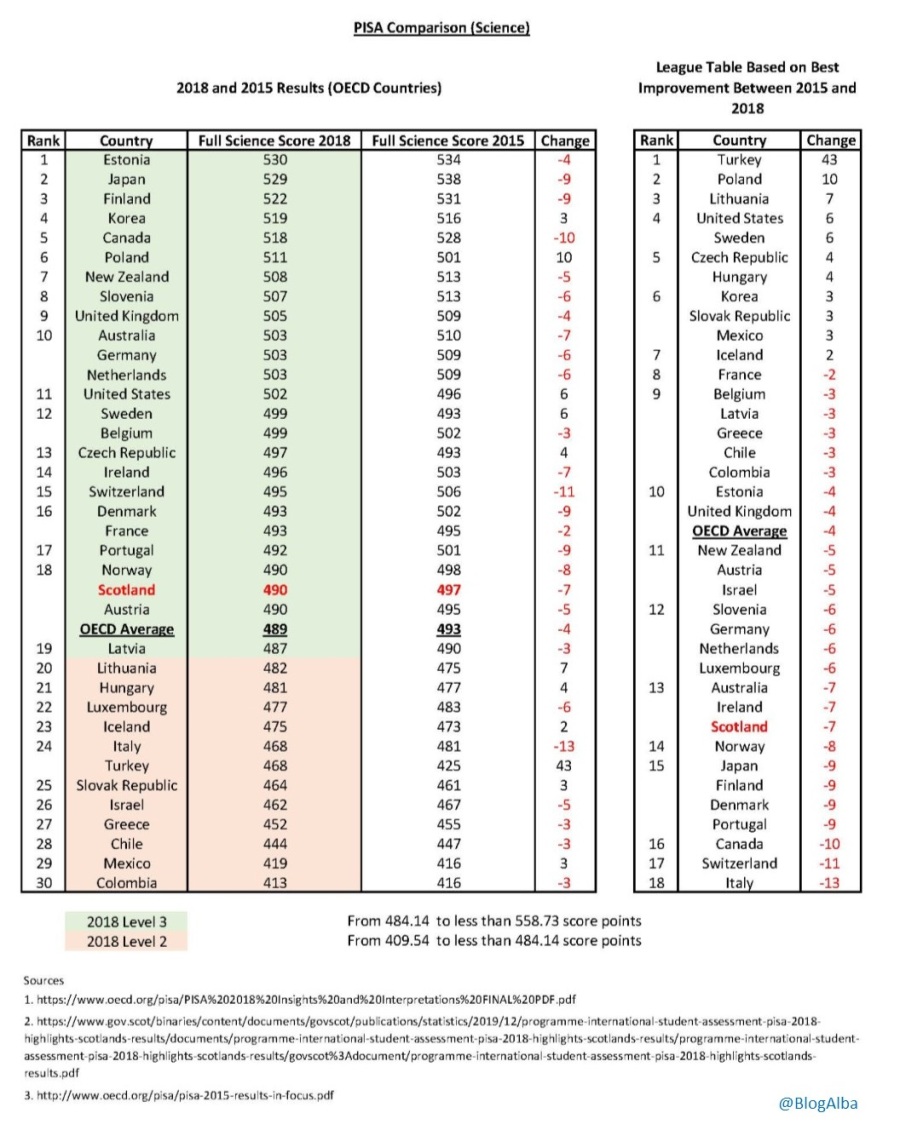 As you will see from the above, Scotland, based on its 2018 ranking within the OECD sits at joint 18th.  This is above Italy, Luxembourg, Austria and the OECD average.  Overall, between 2015 and 2018, its score dropped from 497 to 490 (-7).  This means, overall, between all OECD countries, Scotland’s change in scoring left her sitting joint 13th in terms of overall change for Science. 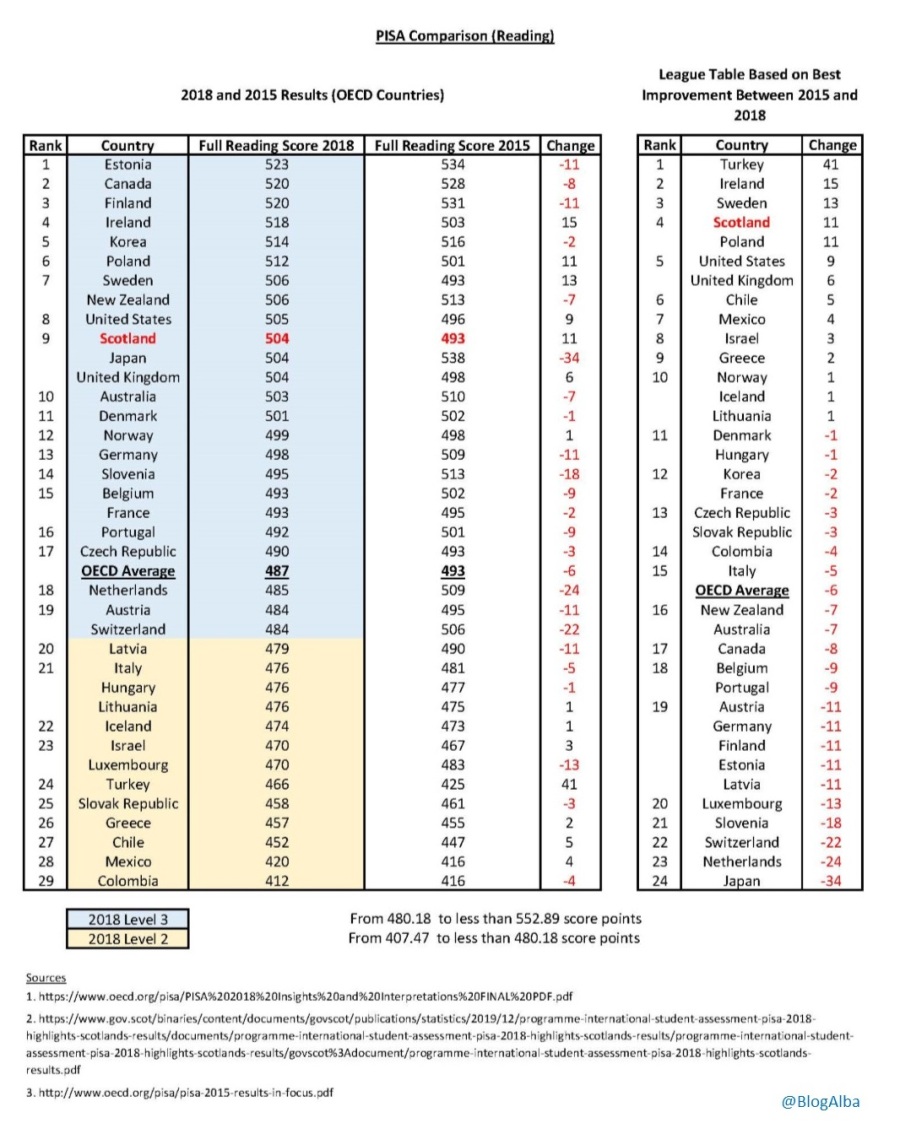 As you will see from the above, Scotland, based on its 2018 ranking within the OECD sits at joint 9th.  This is above Australia, Denmark, Germany, Belgium, France and the OECD average.  Overall, between 2015 and 2018, its score increased from 493 to 504 (+11).  This means, overall, between all OECD countries, Scotland’s change in scoring left her sitting joint 4th in terms of overall change for Reading.

Now, its really easy to pump out a headline stating any one of the Mathematics or Science figures above and label that an SNP failure.  Its also very easy to do it against other UK nations which do not conform to the same quality assurance standards when measuring their own scores.  What’s more, its very easy to leave the story at that as a metaphorical bat to hit the SNP over the head with, particularly when you’re heading towards a General Election in a couple of days.

As a father of three, with two children currently in primary education in Scotland, I have a vested interest in this information.  I want what is best for them.

The education system I experienced is very different to todays, so it is difficult for me to relate to it on the same level.  If I weren’t curious and didn’t do my own research, I might very well believe the BBC and media in Scotland that the SNP has (or is) failing my children, but the little of the education system I do know, I find it hard to believe that the failure portrayed is so vast.

So what if there is more to this story than meets the eye?

What if we looked at the whole picture of the scoring rather than the single figures?  How would that change the perception?  Would that affect the view of the holistic education system in Scotland?

Luckily for you, I have done that and the results are startling and illustrate a significantly different view of the education system, particularly when viewed against other developed OECD countries.

So here is that comparison chart for your viewing. 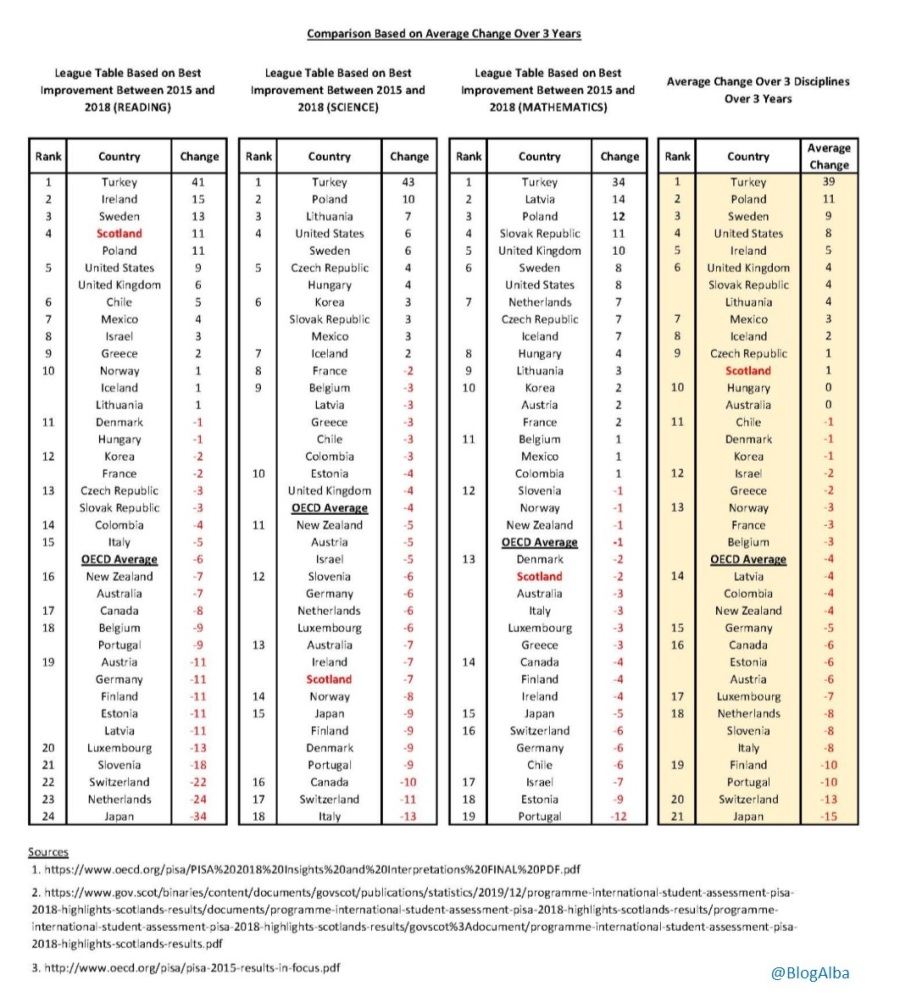 Based on the score changes between 2015 and 2018 for all three measured areas, the average score change across all three areas leaves Scotland joint 9th overall for change.

The ironic thing is, Japan has dropped the most of any OECD country across all 3 areas yet, individually it has performed very well.

This is how the media makes it seem like the SNP is underperforming.  They look at the single score and compare it against their own narrative.  They don’t look at it as a whole.  If they did, their headlines would have been filled with positive messages…but then again, their wouldn’t have been any headlines if they did look at it collectively.

Please feel free to share this far and wide.  Its important the truth gets out there.  Our children are more important than a cheap, ill based headline.

One thought on “PISA – The Truth They Wont Tell You!”